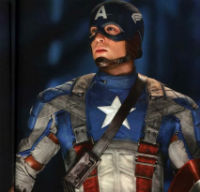 Pirated Blu-Ray/DVD’s for Captain America: The First Avenger, Cars 2, Kung Fu Panda 2, and Crazy Stupid Love all entered the illicit Top 10 this week — as did Theatrical Screeners of Real Steel.

It’s a testament to Real Steel’s marketing and positive word-of-mouth that a Theatrical Screener (TS) copy would be propelled into the Top 10; as compared to a Blu-Ray or DVD rip, TS copies generally have substandard video and sound quality, which can make them tough to watch, especially if there are big VFX or a loud audience. Yes, it’s a camera that’s setup in a theater. If it’s high quality, it’s an empty theater with the sound pulled from the Audio Assistance jack (for the hearing impaired.) If it’s poor quality, it’s filmed from the back of a crowded theater using the camera’s microphone; people are shuffling around (like Mystery Science Theater 3000), munching popcorn and laughing — in addition to the Slavic subtitles at the bottom of the screen.

After reviewing the forums it appears these copies have great audio and fuzzy/poor video; which makes it even more impressive that people would still feel compelled to sit through it (that would give me a head ache). Nonetheless, this will breed more positive word-of-mouth that in turn can drive even more viewers to either go see it in the theaters or purchase the Blu-Ray/DVD/VOD, when they come available. If they’re not going to pay for it, at least they can vouch for it.

The data for the weekly download chart is collected by TorrentFreak, and is for informational and educational reference only. All the movies in the list are BD/DVDrips unless stated otherwise.

Burberry is the first brand to get an Apple Music channel

From Short Films to Directing Shazam! with David F. Sandberg //...

ABOUT US
FilmClosings.com is your #1 film financing, news, entertainment, music website. We provide you with the latest breaking news and videos straight from the film finance industry.
Contact us: [email protected]
FOLLOW US
© FilmClosings | All Rights Reserved
MORE STORIES

So How Much Should You Allocate to the Producer of Marketing...

Film Funds: It’s Not You, It’s Them